Jack of all trades? The universal extinguisher 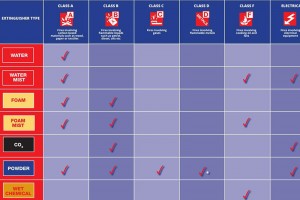 Throughout extinguisher history there has been a search for the universal agent; one which is suitable for all types of fire, with several agents vying for this position in the past.

The introduction of ABC Dry Powder in the 1960s saw it touted as a multipurpose agent, then later that decade Halon 1211 (BCF) was thought to be the ‘space age’ cleaner all purpose agent. The invention of the AFFF non aspirated spray foam extinguisher was also initially posed as the true multipurpose agent with advantages over both Powder and BCF.

In all these cases whilst the agents did each have multi class abilities, in practice all of them had limitations which precluded them from being true universal agents.

There is a difference between an agent being simply safe on a class of fire compared to being effective or appropriate in all cases where it may be used – so let’s look at each class in turn and see what to look for when choosing an agent.

The most effective way of both extinguishing a fire and preventing re-ignition of solids fires, which can tend to retain heat deep into the material and smoulder on, is by cooling.

Water based agents are therefore most appropriate, with a good cooling and soaking ability removing the heat from the fuel. Plain water still retains effectiveness but the use of wetting agents that reduce the surface tension of water allowing better, deeper soaking of materials enhance these extinguishers further, giving greater fire fighting capacity litre for litre than plain water and allowing the use of smaller, lighter, easier to handle extinguishers.

Whilst ABC Powder is rated for Class A fires it extinguishes via chemical reaction, providing no cooling effect, and has some smothering action via melting and coating the fuel with a sticky flux.

CO2 is technically ‘safe’ on class A fires but bears no A rating as the heat of burning solids is such that the temporary displacement of oxygen with CO2 is often insufficient to quell the fire and the discharge pressure can spread burning embers. Its only Class A use of note is in very specialist situations such as the TV/Film stunts/effects sector where expert users are present, as are other extinguishing agents as back up.

Again, cooling is important to reduce the liquid below its fire point so no more flammable vapour is produced. However, water is mostly ineffective except in limited circumstances as it tends to spread the fire.

Smothering/blanketing is more common, especially coupled with cooling and this is where foams excel, particularly for deep seated fires in containers. Depending on the foam type and application they form either a thin film or thick blanket over the burning liquid, both cutting off the oxygen supply and supressing the vapours, allowing the liquid to cool whilst physically preventing re-ignition. Foams and similar water based agents can struggle with running or spill fires not in containers ,particularly if not used by experts.

ABC & BC Dry powders are very effective on class B fires, particularly running or spill fires, due to their chemical inhibition of the fire – but with no cooling or physical blanketing effect the liquid is prone to re-ignition and if you don’t extinguish the fire completely, instant reflash. This is why UK motorsport pioneered the ‘four by two’ technique where two marshals quickly extinguish the flames with powder and two more follow up with foam to cool and blanket in order to prevent re-ignition.

CO2 will smother small liquid fires but is severely affected by wind currents and by not cooling or blanketing is at risk of re-ignition so is usually used where contamination and damage is to be avoided, such as in laboratories.

A gas fire is extremely dangerous as there is a risk of explosion if you have not isolated the gas supply, so caution should be taken with extinguishers stating they are tested on these fires.

Only by cutting off the gas supply can you safely deal with the situation after which you no longer have a Class C fire (probably just a Class A fire in surrounding materials).
Specialist fire-fighting personnel who are trained and equipped to extinguish gas fires where it may not be possible to isolate the supply (e.g., the fire prevents access to the valve) generally use water hoses for cooling and protection and where they have an extinguisher in addition it is powder, which has a proven track record from the 1950’s onwards of being able to interrupt a gas flame

This is a highly specialised class and encompasses a wide range of reactive and flammable metals including magnesium, sodium, lithium, potassium, and uranium.

Water/water based agents react, sometimes explosively, with most metals, particularly if a jet or spray is used, and whilst some metals would eventually cool down to below ignition temperature, others like sodium would thrive and feed on the hydrogen content of the water with explosive results.

A variety of specialist agents have been developed, most only being intended for specific metals and most are dry powder based – Graphite, Sodium Chloride, Copper, TEC - all of which are designed to be gently applied over the metal, to melt/flux to envelop it and then dry out under the heat to crust and isolate oxygen to allow natural cooling.

These risks require specialist assessment to ensure the right extinguisher is selected in the right quantity (in some cases you need 12kg of agent for just 1kg of burning metal) and the right training given – you can’t simply take a Class D marked extinguisher out of a catalogue and safely assume it will suffice.

Cooking oils were given their own class in late 1990s the as the temperature of the burning oil (350C +) compared to other liquids (@50C) meant that the traditional Class B extinguishing agents were ineffective.

Wet chemical extinguishers were the first F rated extinguishers and remain amongst the best as they rapidly knock down the flames due to chemical inhibition but in addition, cause saponification of the cooking oil turning it into a soap scum that dries out, crusts and seals off the hot oil underneath from oxygen, allowing it to cool.

Other F rated extinguishers exist such as foam extinguishers containing an additional additive to thicken the foam blanket against the extreme heat that degrades the normal foam discharge. These are effective, but slower and still susceptible to heat breakdown albeit far slower.

Water based extinguishers - other than the above - are generally unsuitable due to the water mixing with the oil, turning to steam, which then ejects the oil in dramatic and dangerous fashion. Water extinguishers using a fine mist have been able to get an F rating as the fine droplets evaporate before mixing and will eventually cool the oil to below ignition temperature – but it is far slower and requires extreme operator confidence as the flames will still rage whilst cooling gradually takes place.

An agent that physically blankets rather than just inhibiting or cooling remains the best choice.

A non-conductive agent is essential and traditionally powder and CO2 have been used for this purpose.

Water based extinguishers are generally not suited for electrical fires as a water jet has the potential to conduct electricity, however it is the case that many water based extinguishers where the discharge is a spray or mist have passed a test in the BS EN 3 manufacturing standard where they have been safely discharged on a 35,000V supply, meaning they are rated under EN3 for electrical fires up to 1000V.

Despite this CO2 remains the most popular choice for electrical risks against powder or water based sprays and mists. This is because whilst technically safe, the other agents have limits on effectiveness . Most electrical equipment is in cabinets, casings, or other enclosures, with only limited access to the interior (where the heat and burning components are) meaning that both powder and water based agents struggle to penetrate sufficiently to extinguish the fire fully or at all, whereas CO2, being a gas, is able to penetrate and flood enclosures, remove the oxygen, and successfully extinguish the fire. In addition, powder and water based agents provide secondary damage issues – which leads us onto:

Secondary Damage: Does the extinguisher present a risk to the premises and its equipment? ABC Powder does due to it’s acidic PH and propensity to melt and stick to materials and electronics. Historical items, stainless steel surfaces and aluminium are particularly vulnerable (in the US ABC Powder extinguishers are strictly prohibited around aircraft due to the risk to the stability of aluminium airframes caused by the agent).

Risk to users: Again, power extinguishers fall foul of this as if discharged indoors there is a risk of the resultant cloud preventing you seeing what you are doing, and the powder is very unpleasant to inhale. However, risks can be presented by other agents – CO2 in very small rooms, for example. Expert advice is vital in selecting equipment.

Environment: Only plain water and CO2 are natural and environmentally safe agents (CO2 emissions for fire safety purposes are so insignificant as not to be an issue with the Carbon footprint) – this is why the Environment Agency only exempts these types from requiring an Environmental Permit for use in training. Foams and any agent that contains a foam like or film forming additive are particularly damaging due to containing environmentally persistent compounds, with new legislation on the horizon that will change the approach to foam significantly (The US has already ceased the production of portable foam extinguishers).

There is still no truly universal agent for every fire – being safe on a Class does not equate to effectiveness in all likely scenarios and there will always be an area an agent excels in with others where compromises exist and careful assessment by experts is required to match the right extinguisher to the right environment.