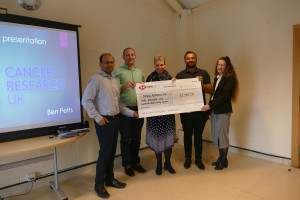 As part of our ‘One Team One Vision’ day earlier in October, the Fire Depot team had the pleasure of presenting a cheque for £3,990 to Cancer Research UK.  Ben Petts who works for the charity visited the office to talk about its work and how the monies raised are used.

The funds were raised as a result of the team walking the whole 24 miles around Rutland Water on 20th September. This was a first for the Fire Depot team as they have never done a physical challenge like this before, but it proved to be an extremely successful day and an even greater success as the fundraising target of £2500 was well and truly smashed!

Laurie Pollard, Managing Partner at Fire Depot commented: ‘We are over the moon to have more than reached our final fundraising target and would like to thank everyone that very kindly donated. We wanted to raise both money and awareness for Cancer Research UK. We all know someone whose life has been affected by cancer, and we want to make a difference for them and to those who will unfortunately have it in the future’.

According to Cancer Research UK there are around 165,000 cancer deaths in the UK every year, that’s around 450 every day (2015-1017). Cancer survival is improving and has doubled in the last 40 years in the UK. Around 4 in 10 cancer cases in the UK every year could be prevented, that’s more than 135,00 every year. Smoking is still the largest cause of cancer in the UK.

For more information on the charity and how to get involved, visit https://www.cancerresearchuk.org/